It has become more and more obvious where the true joy of this sailing lifestyle lies. As Orion has gotten more and more of her systems fixed, faults repaired, and broken things working right, I am finding that a boredom is creeping in. There is lethargy. Snorkeling in crystal clear water, long walks through the jungle at dawn tracking howler monkeys. None of it seems to measure up to the satisfaction of replacing the macerator pump on the head, or the true reward of fixing the engine in the remotest of Mexican anchorages where failure would be a difficult prospect indeed. The joy is in the doing, not the being. The fixing, not the fixed.

This does come as a surprise I must admit. I would have thought that it would go quite the other way, and that as more systems are working correctly and need less attention, that I would be pulled to other pursuits. That I would take satisfaction in having a boat that runs well, looks sharp, is dependable, and that I made that way. That that would be enough. It seems not. It’s almost like with children, when they have finally grown into good god fearing adults and you long for those days when they were in constant need of tweaking and attention.

All that is to say that I have found that having a boat that works does not seem nearly as satisfying as having one that doesn’t. So in that vein I have decided to shop for a replacement for our dear Orion. One that will not only take my time, but fully challenge the limits of the checkbook. For of course not only is their incredible joy in the fixing of broken, worn out parts, but then there is the true satisfaction of spending money on her to bring her back to the level she was when new. West Marine is much like Mecca when you own a boat that needs work. Every aisle cry’s out with something that you could not do without. Then there are the joys of shopping online and having everything delivered to the boatyard and the Christmas like sensation of opening all those boxes. I’ve been missing that.

Lucky for us this new realization is hitting as we sit in the Rio Dulce in Guatemala. Tagline, “Where boats go to die”. And what makes this whole dream possible is that the people that own these once admirable ships actually think they are not worth much and so are willing to let them go for a song. Somehow they have gotten to the point where they think the work on the boat is the chore and the sailing is the joy. I’m glad I have moved past that dead end, and yet I realize that there are those that have not yet reached that level of consciousness. Thank God for the less evolved. 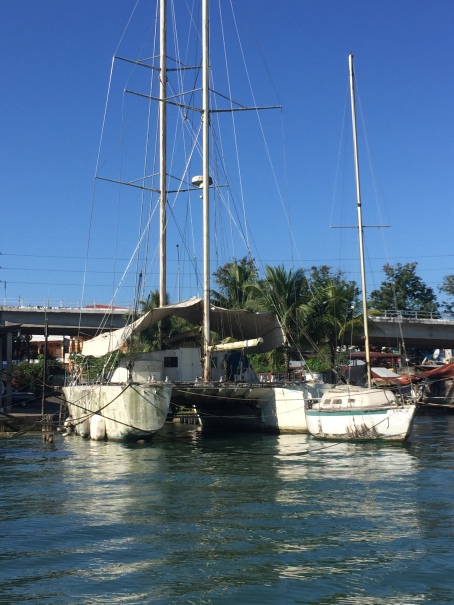 Then there is the sheer joy of looking at seemingly tired and used up boats to find that diamond in the rough. The pawing through the accumulated stuff in the cabins, scraping the mold off to find the true treasures of the bilge. The gamble you take when starting the engine. Will it turn over, and then if it does the question arises is the smoke coming out the back, black, blue, white, and what does that mean? The water in the bilge, the dripping fuel line, the blisters in the gelcoat,  all of which have lead the previous owner to want to walk away, only bring me closer to bliss.

I realize a lot of this new direction goes against conventional sailboat buying wisdom. One way that I plan on bucking the trend is to not get a survey, and not to bring in any “experts” to bring all of their negativity into  the dream,. Not to harsh on my mellow as it were. Many of the “experienced professional’s” look at a sailboat from a certain perspective based on their own and other peoples past successes and failures, and would restrict the thinking of what is possible. There is a feeling, a bond, that one can get with a boat. I plan to trust this completely.  I want the conversation to be between me and the new mistress. I’m finding that if I’m very quiet inside I can put my hands on the hull and feel where she has been, and if ours is a path that we should sail together.

They say the happiest days of a boat owners life are the day he buys his boat, and the day he sells it. I’m hoping both of those will be mine to experience soon. I’m looking forward to this next chapter. Orion has been a fine partner and we have brought her back from a sad state to one where she is proud and happy. As March turns into the beginning of April I can feel this new energy building. I suspect Elia won’t be as excited about this whole prospect as I am, so I’m thinking that I will surprise her when the deal is done. I just know how she loves surprises.